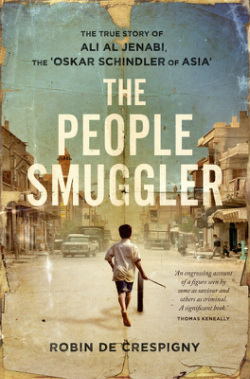 An Evening with Robin de Crespigny
Author of THE PEOPLE SMUGGLER

The People Smuggler tells the true story of an Iraqi refugee, Ali Al Jenabi, who became a people smuggler to save his family and ultimately came to be seen, not as  the heinous criminal the government had hoped for, but as the “Oskar Schindler of Asia.”

'An engrossing account of a man seen by some as a saviour and others as a criminal. A significant book.' Thomas Keneally

'This is a story every Australian should read ... a complex mixture of love of family and a hard-edged determination to survive in a brutal, unforgiving world.' Bruce Elder, Sydney Morning Herald

'An epic story full of dramatic reversals and cinematic cliff-hangers ... Ali emerges as an unlikely but true blue hero: resilent, loyal to his mates and protective of those weaker than himself, canny, resourceful, unafraid of sacrifice, a man of honour ...' Jose Borghino, The Australian

- See more at: The People Smuggler
Powered by