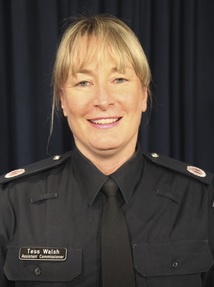 Assistant Commissioner Tess Walsh is the manager of the Western Region which is one of four geographic regions across Victoria. She has performed duties at Superintendent level at the Serious Crime Division which includes The Homicide Squad, The Missing Persons Unit, Armed Crime Task Force and The Arson and Explosives Squad.   Previously she was a Superintendent in charge of West and South Gippsland. Superintendent Walsh has a wealth of strategic, operational and academic knowledge.

Assistant Commissioner Walsh has a strong background in the management of investigations and general duties policing.  Highlights of her career have included investigative duties at a local Criminal Investigations Unit, along with Rape and Homicide Squads, through which she enjoyed the opportunity to manage County and Supreme Court trials. She also considers her time working in the country as an absolute highlight of her career.

Assistant Commissioner Walsh also has a passion for community engagement and effective crime prevention strategies, following her work at the Crime Prevention and Neighbourhood Watch Unit.  Superintendent Walsh was the National President of Neighbourhood Watch Australasia from 2007 - 2011, a role she held in a voluntary capacity.
Assistant Commissioner Walsh has supported her policing career with academic knowledge focusing on leadership, management and research.  She has completed a Masters in Education (Research), Diploma in Frontline Management, Graduate Certificate in Police Management and Associate Diploma in Recreational Leadership.

As a dedicated policing manager, Assistant Commissioner Walsh is committed to providing successful policing services; however she places equal commitment and value on the importance of ensuring that the health and well being of her police officers and public servants is sustained by an engaged, supported and happy workplace environment.