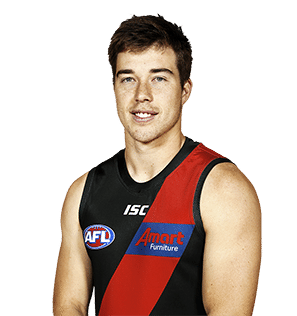 Since debuting for Essendon in 2014, Zach Merrett has been one of the most successful recruits of the past several years. Within his five seasons, he has consistently displayed outstanding development and in 2016, a time of deep unrest for the club, Zach stood up and gave the Essendon fans plenty of optimism and strength as he went onto collect the club’s Best and Fairest whilst also captaining the club in the remaining few games of the season.

In 2017, Zach was named vice-captain. He continues to develop his game and remains a valued member at Essendon.

In May 2019, following the negative treatment of Tayla Harris on social media, Zach stood up for equality and respect: he asked everyone in the football and wider community to “Join me — this is about more than footy” as he made a powerful pledge to stand up for gender equality. This realisation made Zach think deeply about the problems we are all facing both in sexism in the game and in wider society. It made him want to talk and write to reconcile them and to act to help fix the issue.