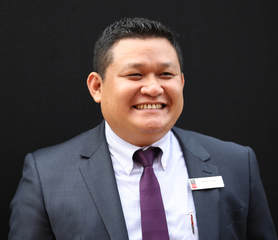 Bwe Thay is a Burmese refugee who arrived in Australia in 2009.

He is known both within Australia and internationally as a passionate advocate for the empowerment of fellow refugee migrants and asylum seekers through education. A graduate of the Australian Catholic University, Bwe now works as a Migrant Student and Community Liaison Officer at Swinburne University of Technology. His work at Swinburne has contributed to that university becoming a leader in providing a welcoming environment for refugee migrants and asylum seekers.

Since 2010 Bwe has been a member of the Refugee Tertiary Education Committee (RTEC), which encourages universities to open their doors, offer online scholarships and give access to higher education for refugee migrants and asylum seekers in transition or refugee camps across the world.

He is also the co-chair of the newly established Refugee Communities Advocacy Network Victoria, and as part of his engagement with these organisations Bwe builds awareness of migrant and refugee issues among government and policy makers, and in effect acts as the voice for the voiceless.