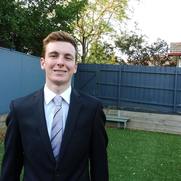 Liam graduated in 2015 following an enjoyable 6 years at the school, taking great pride in participating in ACC Tennis and Hockey, captaining the hockey senior XI in his final year and being named to the team of the year in 2014.

Liam was also involved in music and debating programs in his junior years at the school and was privileged to be a representative on the student council in years 11 and 12, where he was able to gain exposure to many of the social justice programs facilitated by the college.

Following his graduation, he commenced studying commerce at the University of Monash, where he hopes to eventually major in Economics.